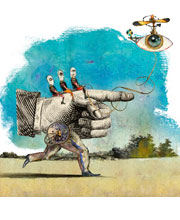 Richard studied graphic design briefly in South Florida. He returned north to study design and illustration, receiving his BFA from School of Visual Arts in NYC. Continued studies include Parsons School of Design and the New School in New York. Early professional years were spent in publishing, ...